On June 16, field scientists from the King County Environmental Laboratory were collecting routine water quality samples aboard the research vessel, SoundGuardian, in the Central Basin of Puget Sound. As they were sampling, they noticed some patchy, brown coloration at the water’s surface at several sites visited that day.

Blooms of Heterosigma akashiwo can develop very quickly and form conspicuous brown patches at the water’s surface where they congregate during the day. This flagellate can bloom in high numbers multiple times per season. (Photo: Gabriela Hannach)

The samples were analyzed and determined to be a dense bloom of a tiny, harmful flagellate known as Heterosigma akashiwo. A regular component of Puget Sound’s phytoplankton community, Heterosigma has the dubious honor of belonging to a group known as Harmful Algal Bloom (HAB) species. Heterosigma has been repeatedly associated with fish mortality.

The highest concentration of Heterosigma measured in the last six years reached 2 million cells per liter in the protected waters of Quartermaster Harbor. Last week’s bloom reached numbers as high as 4 million cells per liter. Cell densities of this magnitude are rarely observed in Puget Sound’s main basin.  It is the largest Heterosigma bloom King County scientists have observed in the history of the phytoplankton monitoring program in Puget Sound’s Central Basin.

A common and globally distributed coastal species, Heterosigma often blooms in shallow recesses of Puget Sound’s shoreline, but much less frequently in the mixed waters of its three deeper basins.

Puget Sound is home to many different types of HABs that exhibit a wide range of troublesome effects for people and wildlife. Heterosigma has long been associated with fish kills and while the exact mechanism is not yet clear, there is some evidence that it produces hydrogen peroxide (a reactive oxygen species) which can cause gill damage and lead to anoxia and respiratory failure.

Scientists believe the explosion of Heterosigma cells was enabled by a period of rainy weather that established a stable surface layer of nutrient-rich, low-salinity water where these cells could thrive and reproduce readily. It is extremely unlikely the bloom was related to the West Point Treatment Plant as the bloom is occurring all over central Puget Sound; the plant’s performance has been normal with no overflows; and the effluent quality has been excellent.

A clear relationship between Heterosigma blooms and rising spring temperatures has been documented in field studies, suggesting that as the average global temperature rises, we could see an increase in the frequency of blooms of this toxic flagellate in Puget Sound waters. 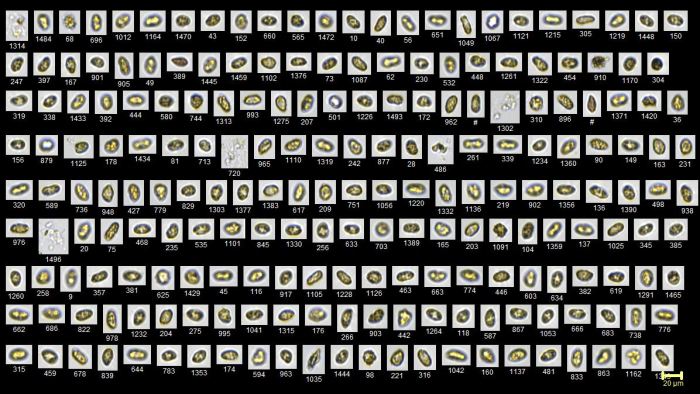 Above are microscopic photos of individual particles detected in water samples arranged in a collage by the FlowCam instrument. The golden, oval-shaped particles in this collage are Heterosigma akashiwo collected from the recent bloom. (Photo: Gabriela Hannach)

Since 2008, the King County Environmental Laboratory has monitored the phytoplankton community of the Central Basin of Puget Sound, using microscopy to document the enormous variety of phytoplankton that inhabit these waters.

King County shares data with local agencies to share and inform aqua-culturists and other relevant agencies as an advanced warning, thereby helping to protect local industry from the potentially deleterious effects of this harmful species.