Long-constrained, the lower White River will soon have more room to move

Stephanie Shelton describes some of the ecological features of the Countyline project to colleagues.

When the region’s heavy rains start this fall, a rising White River will breach areas excavated from a levee that has held it in place for nearly a century and flow into its adjacent floodplain. Cameras mounted on cottonwood trees and engineered log structures will capture the moment, a historic one for both the river and King County.

The Countyline Levee Setback Project is the biggest one to date for the King County Flood Control District, a $24 million project that set back 6,000 lineal feet of levee and reconnected the river to 121 acres of its historical floodplain. Coupled with a future project on the river’s right bank, it is expected to provide far better flood protection to people who live and work in the City of Pacific, where a flood in 2009 served as a wake-up call to the hazards the constrained river posed to the surrounding community.

The project also marks a new chapter for the river’s ecological health. The White River has been a highly manipulated system – straightjacketed by rock and concrete, cut off from its historical channels, and accumulating sediment at a rapid rate – a situation that has led to flooding and decimated salmon habitat. Once it breaches the excavated levee, the river will begin to form braided channels and backwater habitat where juvenile salmon can linger before moving downstream and into Puget Sound. Beavers are expected to move in. Birds – from ospreys and eagles to warblers and flycatchers – will find habitat.

Stephanie Shelton, a senior ecologist in the Rivers section, said she and her colleagues will keep a close eye on salmon runs. The White River is the only one in King County to host spring-run Chinook, listed as threatened under the Endangered Species Act. It’s a highly imperiled population, with less than 10 percent of its historical White River population remaining. “They’re on the brink of extinction,” she said.

Restoring habitat for spring-run chinook, she added, has side benefits: Work done to protect them will provide important habitat to a number of other fish and wildlife species. “That’s why this is such an important project,” she said.

Biologists often focus on what they call “limiting factors” – those environmental factors that limit a species’ population size – and when it comes to salmon, a big limiting factor is habitat for juvenile fish to rear and feed. Many salmon species spend up to 90 percent of their lives in marine waters, but they rely on freshwater habitat during two key junctures in their complex life cycles – when mature adults spawn and when salmon fry emerge from eggs and out-migrate as juveniles. And that freshwater habitat has to be just right, Stephanie explained.

“After they emerge, young salmon can’t hang out in the fast-moving mainstem of a channel. To make sure they don’t get swept away, they need off-channel edge habitats, slow-moving refuge areas and food resources,” she said. Floodplains and side channels used to be more abundant. “But the way we’ve managed our rivers in the post-settlement environment, we’ve eliminated that kind of habitat. We’ve managed rivers for conveyance, not ecosystems.”

Construction crews have notched the existing levee in preparation for this fall’s higher water. When the rains come and the waters rise, about 50 percent of the river’s flow along the Countyline reach is expected to move into a new channel that will wend across the floodplain. And for the first time in a century, the lower White will again have slow-moving freshwater habitat that Stephanie and her colleagues expect will begin to support a fuller and more complex web of life as well as larger salmon recovery efforts in the watershed.

Crews electro-fish along a side channel so that fish can be removed prior to in-water work.

This winter and for the next several years, Stephanie and a multi-disciplinary team of other ecologists, geomorphologists, and engineers will monitor the results. They’ll measure the reduction in flood hazards provided by the restoration project. They’ll see what the new channels do over time – how many braids are formed and the different kinds of aquatic habitat created as a result. They’ll want to see how many of the native plants they’re installing – 50,000 stems altogether – survive and how vegetative species establish and change over time.

And they’ll count fish. Baseline surveys were conducted starting in 2011. Fish biologists will periodically return over the next 10 years and seine for fish along the Countyline stretch, evaluating the results and learning how young salmon are using the new channels.

“The monitoring will be invaluable,” Stephanie said. “Restoration projects often don’t include this component, and thus it’s hard to know how successful a project is. We’re going to be out there, on the ground, figuring out how the river changes, the different kinds of habitat that result and what that means for fish and wildlife.”

“That’s the exciting part,” she added. “And it’s so important, since our results will inform future designs.” 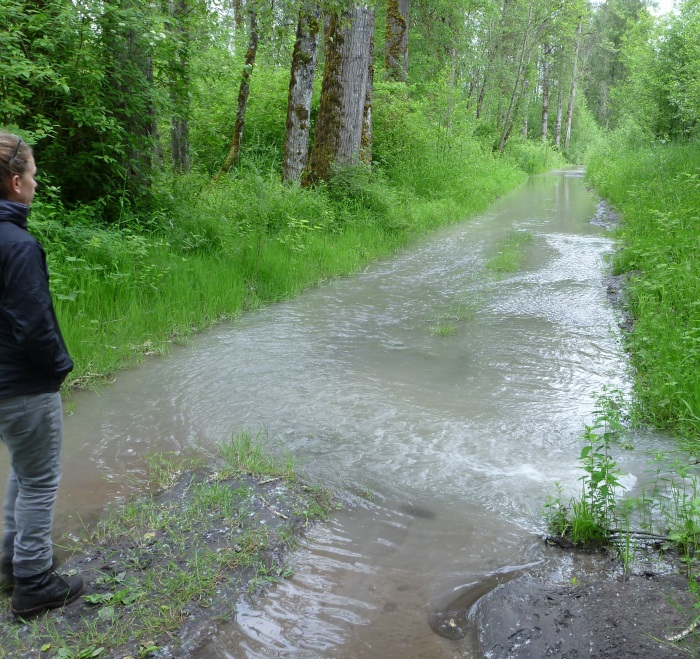 Earlier this year, Stephanie watches as the old levee — prior to excavation — is inundated from winter flows.