Home › Stewardship › When it comes to the White River, geology matters

When it comes to the White River, geology matters 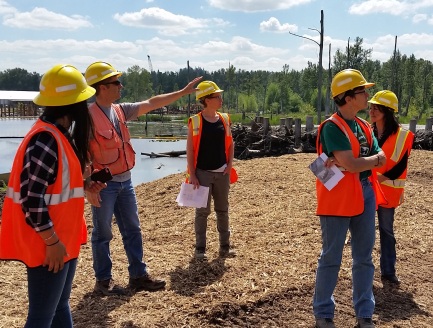 Senior Engineer Chris Brummer points out features of the White River and its surrounding areas during a tour with other Rivers staff members this summer.

Managers in the Rivers section don’t usually talk about what happened 5,600 years ago when discussing their current projects, but when it comes to the White River along the border between King and Pierce counties, it’s an important starting point.

Before the Osceola Mudflow spilled from the flanks of Mount Rainier, the Kent and Pacific valleys where under water, and the White was a short, steep river that cascaded off the mountain and into Puget Sound near where Auburn now sits.

The Osceola Mudflow – Rainier’s largest known lahar – and smaller lahars that followed profoundly changed the landscape, leaving in their wake an alluvial plain of glacial debris and pushing Puget Sound’s shoreline some 30 miles north to present-day Elliott Bay. The White River changed with it, meandering through this newly created valley before joining other flows and heading north to Puget Sound.

The White River is slowly filling up with sediment, leading to more frequent flooding in the City of Pacific.

That geologic history is relevant today, according to Chris Brummer, a senior engineer and geomorphologist in the Rivers section, because of the way the mudflow altered both the region’s topography and its human history. Over time, the fertile valley the lahars created became home first to indigenous people and then to European settlers, and today this populous region in south King County is dotted by towns and cities, farms and industries.

Add to this scenario another geologic phenomenon – channel aggradation. Those last several miles of the White River – the ones that didn’t exist before the lahars – are rapidly filling with sediment, making it shallower and thus much more prone to flooding with each passing year. The result, Chris said, “is an urgent situation.”

Chris is the project manager for the Countyline Levee Setback Project, the largest flood management project undertaken to date by the King County Flood Control District. The project, spanning 1.3 miles of river on the eastern edge of the City of Pacific and extending across the King to Pierce county boundary, reconnects the White River to 121 acres of its historical floodplain. It was substantially completed this fall – and none too soon.

According to investigations by King County and its consultants, the flood capacity of the White along the Countyline Reach has decreased dramatically over the last four decades, when dredging ceased due to environmental laws. Before the 1980s, the channel’s capacity was 25,000 cubic feet per second (CFS); now, it’s 6,000 CFS. Left alone, the channel would likely completely fill with sediment at the King-Pierce county line in little more than a decade and seek a new route through Pacific and Sumner.

The river’s sedimentation at Countyline is due in part to its topography. The White hits its “inflection point” near the City of Pacific, where the slope of the river decreases significantly. As a result, Chris said, the river at Countyline “loses a lot of its energy to transport sediment and starts depositing gravel and sand at a rapid rate.”

Sedimentation is also due to its source. The White’s headwaters are on an active volcano – a glacier-covered mountain that rises 6,000 feet above nearby peaks. Mount Rainier catches more weather, as a result. Its glaciers move rock and dirt, constantly scouring the steep flanks. And those rocks, like rocks on most volcanoes, are weak and crumbly.

The result, Chris said, is a lot of sediment. “Rivers draining active volcanoes in the Cascades produce four times more sediment than rivers that don’t.”

Early on, farmers dynamited the riverbanks to divert floodwaters away from their properties. They reengineered the river, forcing it into what was then called the Stuck River. King and Pierce counties formed the Inter-County River Improvement Commission to jointly manage flooding along the White, Stuck and Puyallup rivers, building bulkheads, revetments, dikes, groins and other barriers.

According to a report prepared by Terry Butler, a former Rivers Section geomorphologist, during the last century alone a million cubic yards of river channel sediments were removed from the Countyline Reach. Asked to translate, Chris said that’s about 50,000 dump trucks worth of sand, gravel and silt.

The impact on salmon populations and river health from all that dredging was profound, and in the 1980s, environmental laws brought an end to the dredging. That’s why Chris and his colleagues began working to find a new way to address the river’s propensity to fill up with gravel and rock.

And they did so with a deep appreciation of the river’s geologic history. During a tour this summer, Chris stood next to the levee in the middle of the project site, not far from the busy East Valley Highway, and noted with a smile that the group was standing on the former shoreline of Puget Sound.

“The processes that have led to this situation are still in place,” he told them. “We’ll still get the same amount of sedimentation. But it’ll spread out over 1,000 feet, rather than 150 feet. And that’s going to make a huge difference.” 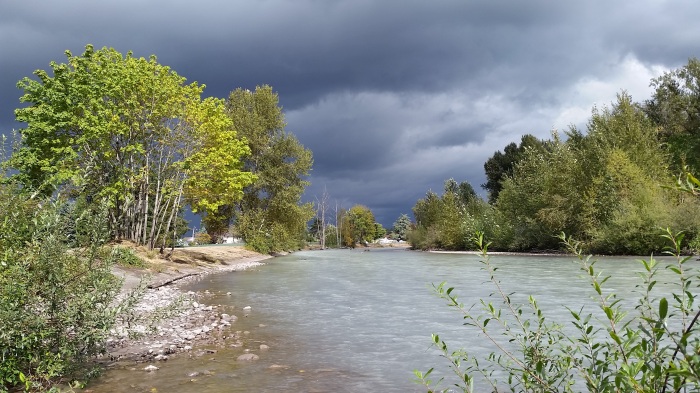 The White River near the Countyline Project.